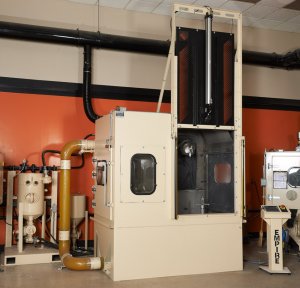 Empire has paved the way for specialized testing using automated systems with advanced robotics and precision controls for uniform media dispersal. Once more, our Product Support Managers have tested parts for a wide variety of industries. These applications include surface preparation, non-destructive cleaning, controlled stripping, and coating removal.

To greater expand our testing capabilities, Empire engineered and built the RBT4884 Robotic Air-Blast System with a large blast enclosure to accommodate parts of variable size, weight, and geometry. It was the third robotic air-blast system to be introduced to the Testing Lab after the RBT36-F and RBT4852-P.

The RBT4884 was built with a single pass approach; to allow our Product Support Managers to efficiently gauge media breakdown rates. By reducing media consumption, this system is capable of blasting parts with an efficient dispersal of media. This in turn lowers energy expenditure, reduces utility costs, improves media reclaim and reduces waste.

What makes the RBT4884 a versatile testing platform is its ability to utilize pressure or suction blasting. This allows our Product Support Managers to test parts using variable media velocities and dispersal patterns. Once more, the system uses a Fanuc M-10iA/12S Robot that is capable of mounting two pressure nozzles or suction guns. Moreover, this multifaceted robot can manipulate blast dispersal within 6 axes of directional movement.

This adaptable system is equipped with an Intelligent Drive that enables parts to be rotated in-tandem with robotic movements. Furthermore, this precise coordination ensures a perpendicular blast hot-spot over areas, especially contoured surfaces. The Intelligent Drive serves as the 7th axis of unified motion, which is the movement of the blast nozzle over the rotation of the part. Empire’s proprietary Ultrawear matting shields the drive and blast area from ejected media.

A Siemens HMI allows operators to initiate point-to-point programing and provides engineers with offline programing capabilities for the RBT4884. To that end, the robot is operated by a Fanuc R-30iB Plus Controller, equipped with a user-friendly Teach Pendant. Furthermore, the robotic assembly is held in a robust 8020 Robot Cage, equipped with a Hypalon Boot that separates the drive controls from the blast enclosure and protects the robotic arm from the blasting process.

The blast enclosure is secured by a pneumatic vertical door that allows for efficient part loading and also provides an excellent vantage for inspection. These systems conserve operational space and contribute to cleaner production environments by minimizing the release of media during door openings. Once more, pneumatic vertical doors are ideal for positioning pick-and-place robotics that facilitate part loading and positioning.

By having a larger blast enclosure with greater weight capacity, our Product Support Managers can test parts of variable size and geometry. With its Intelligent Drive, the RBT4884 can rotate parts in-tandem with 6 axes of robotic movement and achieve uniform blast coverage. These aspects make the RBT4884 a versatile testing platform, which further demonstrates Empire’s commitment to designing and engineering high quality automated systems.