A major supplier of exhaust pipes, mufflers, and exhaust shields to the motorcycle industry wanted to improve the efficiency of their blast cleaning operation. The existing process, that utilized two in-line automated blast cleaning systems, was extremely labor intensive, offered incomplete parts coverage and also resulted in an excessive loss of media.

The first blast cleaning system was equipped with a rotary head with six fixed guns for blasting, while the second system employed a horizontal oscillator that also utilized six fixed guns. The parts, ranging in size from a few inches to approximately 2 feet long by 15 inches wide, were being manually loaded onto magnetic trays designed to hold them steady during blasting and then transported through the blast cabinet on a conveyor.

Each system required two operators – one to load parts and one to unload parts and return them to the front of the machine via a return conveyor for a second pass to blast the reverse side – thus making the process slow and unable to keep pace with the painting line. Also, parts coverage in both systems was incomplete due to the rotary head only having six guns and the horizontal oscillator only blasting each section of the part one time.

Additionally, the conveyor-based design of the two blast systems presented another challenge to the supplier. With both ends of the blast cabinet being open and the parts trays being returned via an open conveyor, there was an excessive loss of media during the production process. Not only was media being blown out of the openings at each end of the machine, it was also easily spilled as the trays were lifted from the conveyor. A large volume of media was ending up on the factory floor that, a cost of $0.80 per pound for the aluminum media being used, was significant concern. 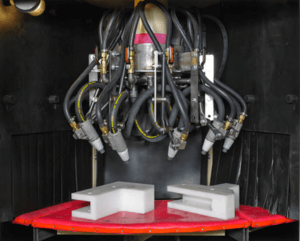 Empire technical sales personnel and application engineers met with the manufacturer to evaluate the current process and determine their requirements.

After careful analysis Empire recommended replacement of the two in-line blast systems with a single automated continuous turntable machine. The new machine featured a suction blast system that employed two rotary heads each outfitted with nine blasting guns. Empire recommended the proper size and orientation of the guns that would ensure complete coverage of the parts and meet the required quality standards.

To improve productivity and speed up the blasting process, the new unit was designed with both front and rear loading stations. This would enable the front operator to load new parts into the system, while the rear operator’s duties would be to flip the parts at the rear station thus eliminating the return conveyor entirely.

The continuous turntable was sectioned off into four quadrants, or pies, each featuring magnets to hold the parts and covered with Ultra-Wear™ Empire’s proprietary surface that resists wear and abrasion. In addition, lighting was included above each workstation for added visibility.

In order to prevent the loss of media, each rotary head was given an independent air supply and was sectioned off with curtains from the rest of the machine. In addition, two additional vestibules were created after each rotary head that housed blow-off stations and dual rows of brushes and rubber fingers to ensure removal of media prior to the parts being flipped or removed from the machine. 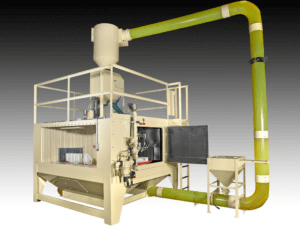 Empire was able to provide a unique solution that increased production in the blast cleaning operation to a level that exceeded the paint line, while at the same time reducing the number of operators required by 50% from four operators down to two operators and cutting floor space in half. Part finish quality was also greatly improved; reducing the number of rejects and returns. The motorcycle parts supplier was able to reduce costs, improve overall turnaround time on their products and improve the final product quality.