Skip to content
Our MH-3 blast gun boosts production rates by 10 to 25 percent when compared to suction guns based on traditional designs. But even more impressively, the MH-3 continues blasting without maintenance at least 10 times longer than previous designs, including its predecessor, our MH-2. Independent tests have demonstrated the MH-3’s staying power many times. 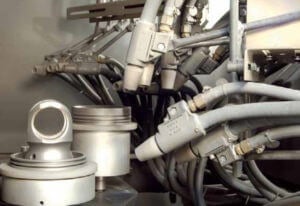 The high efficiency and exceptional durability of our MH-3 result from smoother aerodynamics within the head where air and media mix. Unlike standard suction guns, which supply media to the air jet at angles ranging from 45° to 80°, the MH-3 takes a straight-through approach; fewer turns produce less wear. Sounds simple, but the engineering is not, which sets the MH-3 apart from imitations described as OEM equivalents.
While winning many fans, the MH-3 has enticed impostors. Only genuine Empire parts guarantee the performance and support customers have come to expect from an industry leader.

Other features of the MH-3 include easy air-jet changes (involves only two screws and no dismount from gun holder), single-wrench adjustments and compatibility with manual blast systems. The gun’s rounded back fits into a human hand much like a pressure-blast nozzle, making the MH-3 an attractive tool for boosting efficiency in manual cabinets.