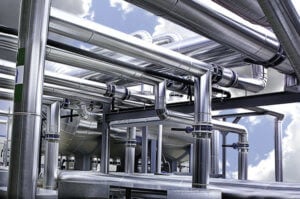 Application: Abrasive blast cleaning of stainless steel components for cosmetic reasons and to eliminate the need for additional finishing.

A major manufacturer of stainless steel components for the power generation industry needed the ability to improve the appearance of the stainless steel surface to make it more homogeneous and in turn eliminate the need for painting or additional finishing. Specifically, they wanted to remove discoloration due to welding as well as machining and tooling marks, and other scratches from the manufacturing process. The housings were produced in various sizes and could weigh up to 3,500 lbs. each, which made it challenging to handle and manipulate. Due to the extreme weight, shipping costs, to and from subcontractor was also a major factor. Quality was also a major concern as a single unit could sell for as much as $100,000. As a result, they were looking both to bring this process in-house and find an automated minimum labor solution that would guarantee a consistently high quality finish every time. 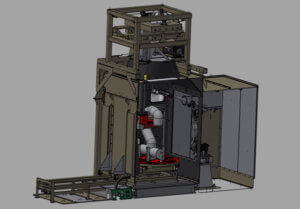 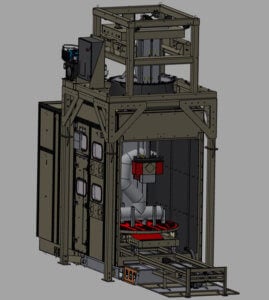 Empire technical sales personnel and application engineers met with the manufacturer to evaluate the current process and determine their requirements. As a result, Empire developed and installed a custom engineered, automated abrasive blast cleaning system that was able to accommodate large, heavy parts.

The overall system measured 20’ wide x 26’ long x 20’ high. Designed to fully process components of various sizes, the system employed a fully automatic 11-axis robotic system with turntable and special lift enclosed in a two-story blast room with an extension for loading. Due to the large size and shape of each component, special fixturing was designed to secure them on the turntable for processing. A crane located outside of the blast room would be utilized to manually load a component on to the fixture. Once loaded, a servo motor would automatically move the component into the blast chamber and close the door to seal the enclosure.

A key feature of the system was the ability to automatically blast all of the components’ surfaces including those covered by the fixturing. Once inside the enclosure, a six-axis robotic arm would automatically blast one side of the upper section of the component. Then the turntable would rotate 180 degrees to allow blasting of the opposite side of the part. Due to the fixturing required to hold this heavy part the robot was not able reach the lower areas. Since the components were shaped like an upside down “U”, Empire’s engineers designed a special hydraulic manipulator that grabbed them under the upside down “U” and lifted them out of the fixturing. This allowed the robot to blast one half of the bottom and after a servomotor rotated the hook allowed the other half to be processed.

To enable precise coverage of all surfaces on the component, the robot controller utilized Robot Master software to govern the operation of the robotic arm. A key feature of the software was the ability to simulate and view all motions in advance during the design stage to ensure there would be no collisions or out of path areas prior to actually building the system. This was also a big advantage as the amount of workspace required for the system was a concern. Being able to precisely simulate the robot’s path allowed Empire to design a system that efficiently utilized the space required for blasting and resulted in an optimal size room that ultimately saved valuable workspace.

Additional features of the unit included lower and upper glove ports and conveniently located manual nozzles inside the blast enclosure for touchups. A man lift was also employed so workers could easily reach the upper glove ports in order to blast areas at the top of the seven foot component. 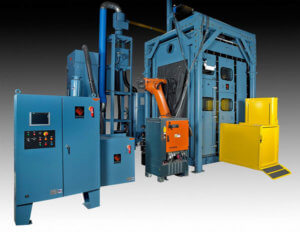 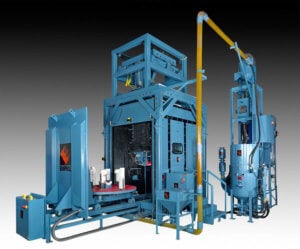 Empire was able to supply an abrasive blast cleaning system with precise robotic control of blast areas and material-handling features that not only increased productivity, but also assured repeatability — a major concern in this quality-intensive application that affected the manufacture of critical components. The housing manufacturer was able to reduce costs, improve the overall turnaround time on their products and maintain greater control over final product quality.