For many blast cleaning or peening applications, a part’s finishing specifications may be beyond the capabilities of a standard blasting cabinet. Empire is able to take the standard product line and modify the cabinets and technology to fit the application requirements. As an example, a customer may have a part that weighs 2,000lbs.; however the standard Pro Finish cabinet can only handle a 1,000lb capacity. Through Empire’s modified program, the upgraded design could include a raising the gloves and window in the cabinet to accommodate the customer’s largest part an in/out turntable or modified DC drive for part handling. 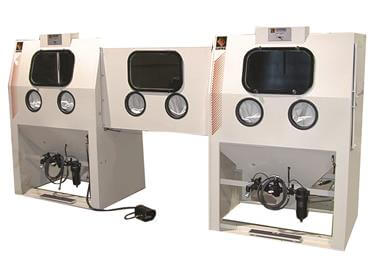 Typically the process begins with an RFP through an authorized Empire distributor. The proposal information is filled out by the customer and aided by the distributor to gain an understanding of how they want to process the part and cabinet features such as a turntable, outside platform etc. Empire would develop a quotation that fits a certain range of adjustments to standard equipment. During quoting proposal drawings are developed for customer clarification.

The proposal is sent to the customer for review and feedback.  We will put together an approval drawing after the order is accepted.

During the proposal stage we may get a sample part to review and possibly process. Processing is be performed by Empire’s Product Support Team in our demonstration lab. After the proposal stage is complete and an order is received an approval drawing is generated with all of the important details of the system shown.

After the approval drawing is finalized the order is released to Production and Fabrication.  From there the modified cabinet goes to paint and on to final assembly. After assembly is complete we perform pneumatic and electrical tests to ensure the system is working properly.

Final inspection is performed by:

With stringent inspection and quality checks the cabinet is ready for shipping and installation.

At this point the customer may come to Empire’s facility to inspect the system, or for a “runoff” to test the system. If the test is satisfactory, the cabinet is cleaned and prepared for shipment. The distributor then helps to setup the system upon arrival at the customer’s facility. Regional managers may also attend the setup and help with training if necessary.

A modified cabinet project will generally take approximately 8 to12 weeks from inquiry to installation.