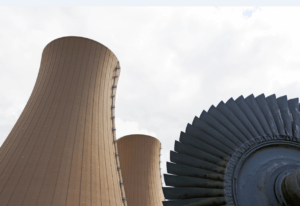 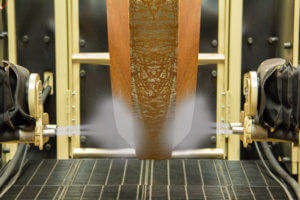 A major supplier to the power generation industry wanted to automate the refurbishing of steam turbine diaphragms using abrasive blast cleaning. The existing process that involved manually blasting the diaphragms with a worker in a blast booth was found to be extremely labor intensive and time consuming. Part size and configuration would make automation difficult, however, as the diaphragms ranged in size from 45” to 90” in diameter and each part had many different faces. In addition, the fact that the parts had already been in service meant that extreme care needed to be taken to ensure that the proper amount of material was removed. Each surface required a precise amount of blasting to bring it back to original specifications. An even bigger challenge was the fact that parametric programming would be required to segment the blast areas, however, 3-D CAD models of the parts did not exist.

The power generation supplier was an existing Empire customer that was already using an Empire blast system to process newly manufactured parts. Based on the success of this system, they turned to Empire for a solution to blast cleaning the steam turbine diaphragms. After careful analysis of the problem, Empire devised a solution and was also able to demonstrate to the customer how system would work before purchasing.

To automate the process Empire provided two custom engineered automatic robotic blast cleaning systems featuring invert-mounted robots. They recommended the proper size and orientation of robots that would get the job done efficiently and to meet the required quality standards. In order to allow for parametric programming and segmenting of the blast areas, Empire worked closely with Robot Master who developed a custom software program which would enable the supplier to create 3-D CAD models of the diaphragms.

Utilizing the industrial PC that was supplied with the blast system, the software program featured the ability to enter up to 29 different dimensional parameters in a spreadsheet format and then programmatically generate a 3-D CAD model. This model could then be viewed on screen to make sure that it matched the physical part. After confirming that the 3-D model matched the diaphragm, a robotic tool path simulation could be executed with exact robotic blast sequence viewed on screen for quality control purposes prior to actual processing. The software also offered the ability to upload the program from the industrial PC to the blast unit’s robot controller via FTP versus the traditional method of using a USB card, which was faster and more reliable.

The robot controller also utilized a Robot Master software package that enabled precise segmenting of the blast areas. A key feature of the software was the ability to programmatically select whether each surface of the part would be processed simultaneously or if needed, selected individually. This selective feature allowed critical areas to be easily reprocessed eliminating time-consuming manual touch-up. 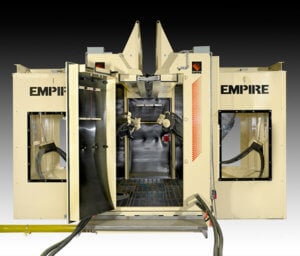 Empire was able to provide a unique solution that enabled the supplier improve quality and reduce costs by replacing a worker in a blast booth with an automated blast cleaning system. The power generation supplier was able to reduce the time it took to blast clean a single diaphragm from 4 to 5 hours manually to as little as 45 minutes resulting in a significant savings in both time and labor.