Skip to content
Some very attractive markets, including medical manufacturing, aerospace and micro-electronics to list a few, now rely on precision blasting (i.e., blasting with fine media at very low and precisely controlled flow rates) for a variety of cleaning and finishing procedures.
Until recently, many of these applications, particularly those requiring the use of very fine media at flow rates measured in grams per second, were not ones in which Empire participated. Some imaginative matchmaking between our Portable and Automation groups, however, has put a new spin on this picture.
The story begins in the 1990s with the introduction of our SafeStrip portable, a product designed to handle fine, light media primarily for purposes of cleaning delicate surfaces. Soon after, it became clear that the market for blasting equipment with a “light touch” went beyond outdoor applications, and we responded with our SafeStrip cabinet line. 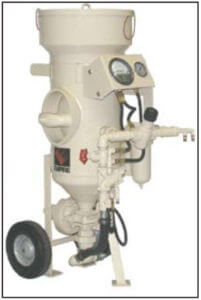 Recently, when our Applications Engineering department received an RFQ (request for quote) on a system capable of etching over 400 medical devices per hour while blasting with under two grams of very fine, very expensive media per second, our SafeStrip technology won the sale.
By teaming up two SafeStrip pressure vessels with an indexing turntable, we developed a system that easily exceeded customer requirements for repeatability. In fact, on the crucial issue of maintaining consistent media-flow rates, our run-off tests demonstrated variances of less than 0.1% — well within the customer’s tolerance of 5% — while blasting with under four ounces of media per minute.
To learn more about Empire’s “Low-Flow” capabilities or any of Empire’s air-blast products, please contact your local Empire distributor or Empire directly.