Skip to content
In operations relying on a heavy flow of single-pass abrasives to air blast large work pieces, the move up to an Empire room typically pays for itself in less than a year. By empowering users to switch from a one-pass abrasive, such as coal slag, to a durable abrasive that recycles many times, Empire rooms slash costs for replacing and disposing of blast media. Per-day savings on a media flow of over two tons exceed $400 in operating costs alone, not to mention the associated environmental and operator-safety dividends accruing from blasting within an enclosure designed specifically for the process.
Empire’s preassembled blast rooms feature #10 gauge wall/ceiling panels and fully welded construction. Besides eliminating the need for on-site excavation, they offer many options including:
• Overhead monorails or trolleys
• Turntables and work carts
• Rotary-drum separators
• Exterior work stations
• Multiple blast outlets
• PLUS three types of recovery floors.
Our pneumatic systems retrieve light, junk-free media at low cost. Our auger and vibratory floors transport all types of media — including debris containing nuts, bolts and fibrous materials — through a three-step reclamation process in which “good” media goes back to work, cleansed of dust and debris. Empire also builds and deploys field-erected blast rooms, tailored to a wide variety customer needs, throughout the world. 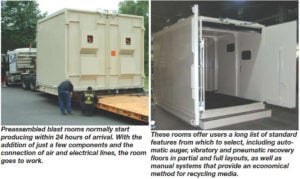