Skip to content
Empire’s latest development, the PRobot™ line, air blasts parts with irregular contours to the most stringent process standards. By integrating robotic technology with Empire’s state-of-the-art automation, these systems not only cover complex geometries precisely but also deliver the repeatability and validation required by many producers of aerospace parts and medical equipment. 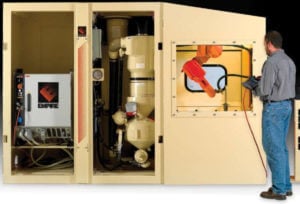 The machine shown above, for example, combines all functions (excluding compressed air and electrical supplies) within a compact enclosure. It’s easy to move, simple to hook up, and its small foot print provides the space savings so highly valued in cell production. In addition, roof mounting the robot opens the work envelope to a full 360°. In some cases, it eliminates the need and cost for a seventh axis, such as a servo-powered turntable. The robot manipulates blast nozzles to trace work pieces or, alternatively, it orients parts within the blast stream, depending on which approach proves more productive; economics make the call.
In critical applications and even less demanding ones, the PRobot™ line pays dividends in many ways. Even though capital requirements are high, the systems contribute to efficiency in ways less obvious than major reductions in rework and labor costs. For starters, more precise blasting of work surfaces saves media and compressed air when compared to systems that rely on over blasting to assure adequate coverage. In addition, many concerns related to operator health and the work environment evaporate. NADCAP audits become much less stressful with the addition of media-flow controls and media classification. The PRobot™ stands ready to show its capabilities in Empire’s newly expanded product demonstration and test facility.