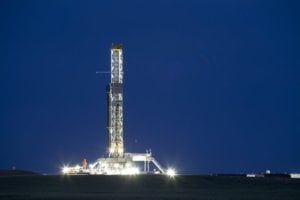 Application: Abrasive blast cleaning of fracking valves prior to coating

A major supplier of fracking valves to the oil and gas industry needed the ability to blast clean the valves prior to coating. As part of the manufacturing process, they were using two indexing turntable abrasive blast cleaning machines made by an Empire competitor. These machines were suction blast units with 6 to 8 guns per unit. The valves being processed were cylindrical in shape and approximately 6 inches in diameter by 6 inches tall. The surface included several valve seats and protruding surfaces that made the blast cleaning process challenging. Employees had to continually manually readjust the nozzles to accommodate the different parts. In addition, some parts were more complex resulting in a longer set up time for the guns. The finishing step was very important as after blasting the valves had a coating applied, however, the manual set up was time consuming and affecting overall quality and repeatability. 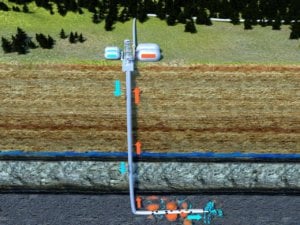 Empire technical sales personnel and application engineers met with the manufacturer to evaluate the current process and determine their requirements. After careful analysis, Empire recommended replacement of the two suction blast machines with a single automated indexing turntable machine that would employ a pressure blast system rather than suction blasting. Fully programmable, the new machine would dramatically reduce set up time and make production more efficient.

The Empire machine consisted of a pressure blast system with six pressure nozzles including one vertical oscillation station with three nozzles and one horizontal oscillator with three nozzles. This system featured a menu controller where the blast parameters for each job could be input. The new machine also employed two direction (clock-wise and counter clock-wise) part rotation control so that when the oscillator stroke was going up the part would turn in one direction and then when the oscillator stroke went down the part would turn in the opposite direction. The end result of the changing part rotation was a more consistent finish. To further improve the surface finish, the Empire machine employed a higher rotation speed than the machines it replaced. 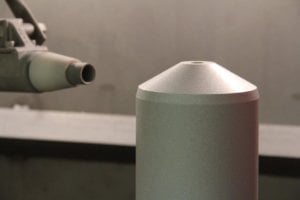 Empire was able to supply an indexing turntable abrasive blast cleaning system with advanced computer-control and segmented blast-coverage that not only increased productivity, but also assured a consistent finish quality – a major concern in this quality-intensive application that involved critical components. The fracking valve supplier was able to reduce production time from two minutes per part to less than one minute per part while maintaining or in some cases exceeding the current quality.