Skip to content
PROCESS: “Deflash is back at Empire” – To meet a customer’s need to deflash electronic components, Empire designed and built a fully automated magazine handling airblast system to process over 3000 components per hour. An operator inserted the magazines and the system would unload the component strips containing 32 parts, deflash and reload the strip at the exit end.
INDUSTRIES: Electronic Molding, Component Manufactures, Mold Companies 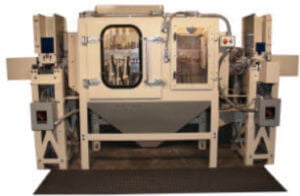 EMPIRE EQUIPMENT:
The magazines are loaded in a stack and mechanically transferred to the component discharge area. The unload finger pushes the strip out of the magazine and in to the belts. The belts convey the strip past the nozzles, which clean and deflash dedicated areas with plastic media.
After blast, the part is rinsed with a mist to remove dust prior to being reloaded into the magazines.
The full magazines are transferred to a holding stack for removal by the operator. Sensors provide process management to ensure positive production results.
Included in the package was a fully STAINLESS STEEL weldment to withstand the wet environment and the system’s continuous duty cycle.