Skip to content
PROCESS: To improve air blast etching of large flat sheets, Empire develops an automated system to process large sheets with minimal operator involvement. The main objective was to produce a uniform blasted surface, on one side, within a self-contained environment.
INDUSTRIES: Coating Suppliers and Manufactures 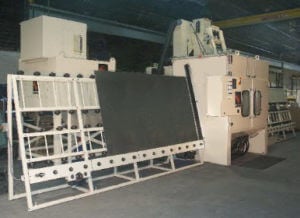 EMPIRE EQUIPMENT:
After the sheet is loaded on one side, the automatic system processes the sheet with oscillating pressure nozzles for uniform coverage, as it moves through the blast enclosure. The plate indexes 1 inch or more at a time and the nozzles oscillate upward until part was covered and indexes again. Then the nozzles move down to cover the next area and, so forth, until completed.
Unit processes various sheet sizes one after the other as they are loaded for cleaning and unloaded when done.
With PLC Automatic System Controls, the unit reduces operator involvement and uniformly blasts each part while keeping him out of harms way. For added control, the process can be stopped and restarted without lose of a uniform finish and finish is maintained across the entire part surface.
It has a media makeup hopper to reduce operator’s duties during blasting. The powered conveyor and load stations make for easy part handling and increase productivity.